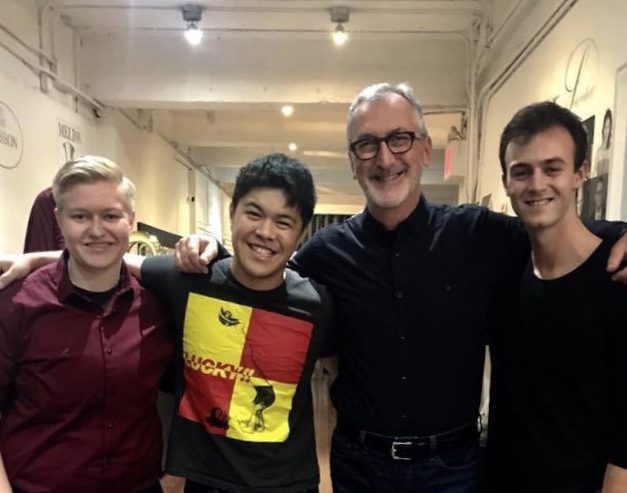 While in New York for our concert at The Crypt Sessions (see “ROCO in New York”), I also gave a master class at the Buffet Crampon Showroom.  I am grateful for the kindness and support of Laurie Orr, the Showroom Manager, who made the master class possible despite our miscommunication about dates.

The ROCO musicians had been asked to keep Wednesday and Thursday, October 17 and 18, completely open for our rehearsals and performances, and to schedule any other activities for earlier or later in the week.  When Laurie and I communicated about dates, our final email was an agreement that the class would be scheduled for Tuesday, October 17 . . . . . . yikes.  I think we both missed the error, as Tuesday was actually the 16th!  All along, because of my agreement to block Wednesday and Thursday off for ROCO, I had Tuesday in my book while Laurie focused on the date of October 17.  The night before my early morning flight to New York, I checked my email around 9 p.m. to see a notice that Laurie had tagged me in a Facebook post about my master class on Wednesday, October 17.  I was immediately on the phone and writing emails to see what could be done, and left the next morning unsure of how things would unfold.  Meanwhile, there’s a moral to this story:  Always double check the dates!

Thanks to Laurie’s efforts first thing on Tuesday morning, we were able to have the class on Tuesday afternoon, even though not all the clarinetists who were scheduled to play were able to shift their schedules and it’s likely that more people would have attended had we been able to have the class on Wednesday as advertised.  (In fact, I’m still getting messages from people telling me they were planning to come on Wednesday but couldn’t change their schedules at the last minute!)

It was great to receive the news upon landing in New York that the master class would go on as I had planned, and the timing ended up working out really well:  Since not all five students originally scheduled for Wednesday afternoon were able to change their schedules,  I was able to spend even more time with the performers who were made it to the two-hour class on Tuesday.

Mark Allen, Jr., a MM student at NYU, performed the first movement of the Poulenc Sonata, and Tyler Hsieh, a DMA candidate at Manhattan School of Music, performed some orchestral excerpts, as well as Riffs from Bernstein’s Prelude, Fugue and Riffs.  It was wonderful to work with both of them.  They were receptive to my comments and responsive to all my requests.  I love teaching so much and it was a great pleasure to work with these gifted, hard-working students.

It was also terrific to see my former student, Graeme Johnson, who stopped by for the latter part of the class on his way in from New Haven.  We enjoyed catching up and visiting with Laurie and the other clarinetists during a little reception after the class.

Laurie does an amazing job with the NY Showroom and is a true asset the Buffet Crampon family.  I hope to see her and visit the Showroom again in the near future. 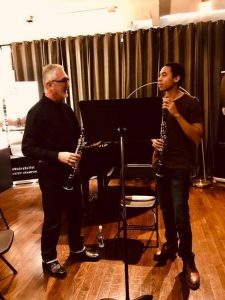 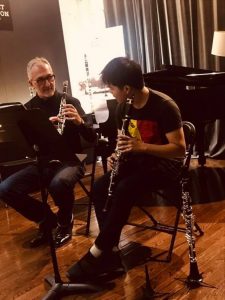 “I cannot teach anybody anything, I can only make them think.” – Socrates