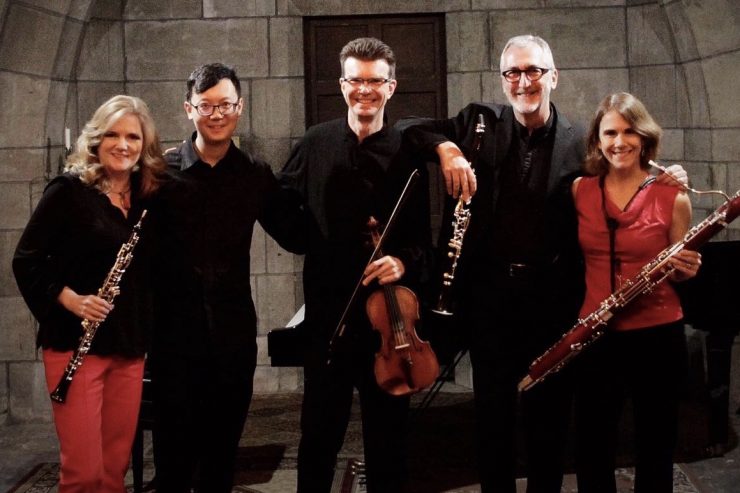 On Thursday, October 18, a group of five musicians representing ROCO performed a sold-out concert at The Crypt Sessions, a classical music concert series in the Crypt under the Church of the Intercession in Harlem, curated by the incredible Andrew Ousley and presented by Unison Media.  ROCO’s founder and artistic director, oboist Alecia Lawyer, ROCO concertmaster Scott St. John, bassoonist Kristin Wolfe-Jensen and I were joined by composer and pianist Kevin Lau for an exciting concert featuring works we had commissioned, including music by Bill Douglas (Trio for clarinet, bassoon and piano), a reed trio by Alyssa Morris entitled Nik-Nak (“N” for Nathan, “A” for Alecia, and “K” for Kristin), a duo for violin and piano by Heather Schmidt, and The Nightingale, a trio for violin, clarinet and piano by Kevin Lau.

In addition to clarinet, oboe, and bassoon, the first movement of the trio by Morris, Wood, calls for the use of a wood block.  The second movement, Glass, requires use of several bottles tuned to specific pitches, and the final movement, Metal, includes the triangle.

Kevin Lau’s imaginative trio is based Hans Christian Andersen’s fairy tale, The Nightingale, and requires a narrator, a role beautifully filled for this performance by Alecia Lawyer.  Kevin’s goal was to write a piece of music to the fairy tale in the same way that Disney appropriated some of the fairy tales like ‘The Snow Queen’ and ‘The Little Mermaid’.  The plot revolves around the enchanting song of a nightingale — a melody that transfixes the emperor of China, and the trio Kevin has created is stunningly beautiful.

The Crypt Sessions advertised our concert as follows:

ROCO is the future of the orchestra. They are the iPhone X to your local symphony’s vintage 80s walkie-talkie cell phone. They’re able to flex in size from 1 to 40 players based on what they’re doing – whether it be a brass quintet in a brewery, a theatrical version of Peter and the Wolf (In an actual zoo. With wolves. Promoting wolf conservation.), or as a full-on chamber orchestra, where they were one of the first to incorporate apps and livestreams into their performances. They’re all about building new connections to audiences, and changing how people experience classical music.

They’ve also commissioned more than 75 new pieces, and even though they’re based in Houston, they’ll send a crack team of 5 performers (including their founder, oboist, and total rockstar Alecia Lawyer) to play a program of music that they helped to create, ranging from a work inspired by a Hans Christian Andersen fairy tale to a trio that uses sticks, blocks and bottles as a rhythm section.

They’ll rock the house, tell some stories, and share some laughs along the way, and we promise that you’ll walk out with a spring in your step and a smile on your face.

Their prediction came true, as we did our best to “rock the house” with our music, we told some stories, and we shared some laughs, all with a very warm and enthusiastic audience.

Our adventures in New York also included a stop by the SiriusXM studios to record some music and an interview for future broadcast on their Symphony Hall channel.  If you subscribe to SiriusXM, keep your eyes and ears open for scheduling announcements!

“The city seen from the Queensboro Bridge is always the city seen for the first time, in its first wild promise of all the mystery and beauty in the world.” — F. Scott Fitzgerald