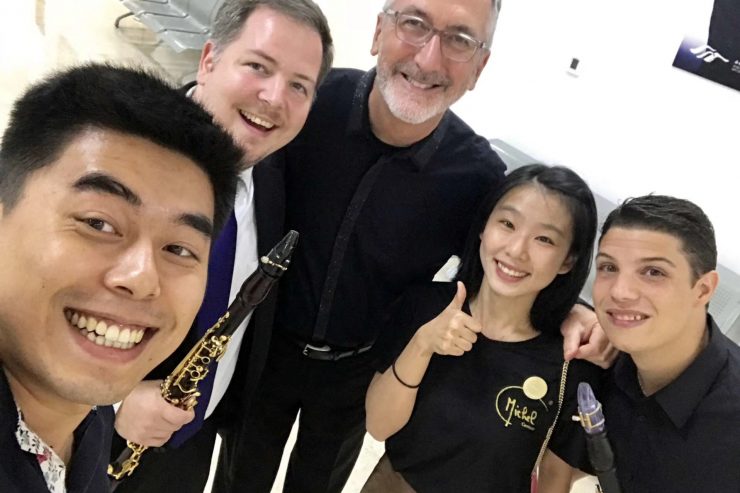 My week in Xi’an was action-packed, inspiring and rewarding.  I worked with many talented clarinet students, performed with some excellent musicians, and heard some beautiful clarinet playing and music making by the other guest artists.  It was wonderful to see old friends, forge new friendships, and meet so many people who had come to Xi’an from all over the country for this year’s festival.  Last but not least, it was wonderful to see my former student, Xiangyu Zhou (Joe).

Joe met me at the airport when I arrived on Sunday night and we had a great time catching up during the drive from the airport to the hotel.  Ordinarily, this trip would require only 40 minutes, but because of many residents returning from weekend activities and a number of accidents on the freeway, we were on the road for almost two hours.  But we were happy to have the time to visit since we hadn’t seen one another since Joe came to hear my trio, Strata, perform in Merkin Hall in 2010.  Joe is doing wonderful things in the world as a teacher and performer, and I am very proud of him.

On Monday, I was assigned to teach master classes from 8:30-11:30 a.m., and 2-5 p.m.  Joe and I had lunch at a terrific rice noodle shop in downtown Xi’an between classes, then enjoyed a delicious dinner after the afternoon class with Zheng Chi, former professor of clarinet at the Xi’an Conservatory, and his son-in-law, Ben Lulich, principal clarinetist with the Seattle Symphony.  Mr. Chi is also the father of one of my former students, Saisai Chi, who is now married to Ben Lulich—a perfect example of just how small (and wonderfully large) the world can be.  After dinner, I had a rehearsal with my assigned in pianist in preparation for my Tuesday night recital, after which I very happily fell into bed. 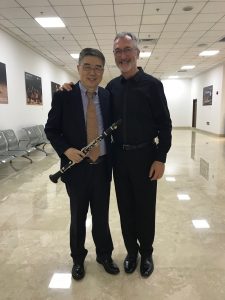 With Mr. Chi, Saisai’s father and a wonderful teacher and performer

On Tuesday morning, we had our dress rehearsal and I had the rest of the day to practice and rest.  Our concert on Tuesday evening was well received by the always enthusiastic audiences in China.  The highlight for me was performing the Poulenc Sonata for Two Clarinets with Joe, who is sounding really fantastic. 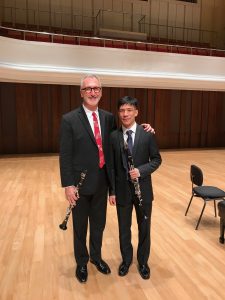 With my wonderful former student, Xiangyu Zhou, after our performance of the Poulenc Sonata for Two Clarinets

Activities on Wednesday included a morning master class and another in the afternoon, followed by an evening concert honoring Wang Yu, a clarinetist whose teaching and performing influenced several generations during his 60 year (!) teaching career.  Several of his former students, including his own son, as well as students of his students were featured in performances that were both impressive and moving.

I taught two more master classes on Thursday and then heard a wonderful concert Thursday evening by Ben Lulich and Ivan Villar Sanz.  They are both stunning performers and I left the concert hall feeling energized and inspired.

On Friday, I had the morning off, so I exercised and read and enjoyed a leisurely walk around Xi’an in the area of the hotel.  The couple who organized the performers for the master classes, Franky and Bei Bei, took the guest artists out for a delicious lunch of dumplings—my favorite!  It was great to have some time to relax and visit with everyone.

After lunch, we had a dress rehearsal for the evening concert.  We were each assigned to perform a portion of a work as soloists with the festival clarinet choir.  I played part of the Bassi Rigoletto Fantasia which was a blast on many levels!  After the dress rehearsal, we all taught one last master class, then gathered in the hall for the final concert which was truly memorable. 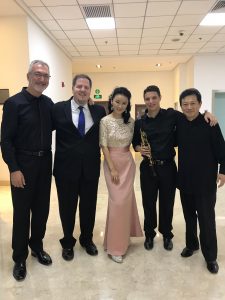 I’ve been fortunate to be a part of many festivals and concerts in China, but I’ve never had a more rewarding experience that last week’s festival in Xi’an.  I was happy to be a part of the event, and remain grateful to the organizers, and to Buffet Crampon and Vandoren for making my participation possible.

Twenty years from now you will be more disappointed by the things you didn’t do than by the ones you did.  So throw off the bowlines, sail away from the safe harbor.  Catch the trade winds in your sail.  Explore.  Dream. Discover.