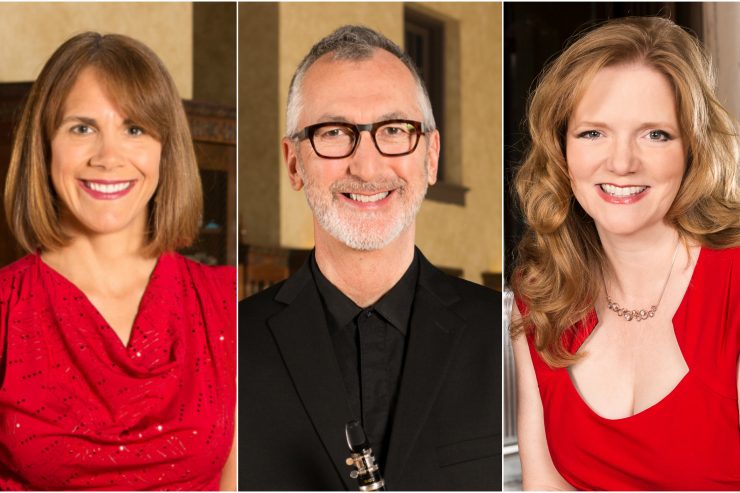 Last weekend was spent in Boston with my friends and colleagues oboist Alecia Lawyer and bassoonist Kristin Wolfe Jensen.  As Trio ROCO, we represented River Oaks Chamber Orchestra and championed the work of female composers at Women, Feminists, and Music:  Transforming Tomorrow Today, the joint conference of the International Alliance for Women in Music and the Feminist Theory and Music 15 group.  The event was held June 6-9 and was hosted by the Berklee College of Music.  Attendees from all over the country gathered in Boston for presentations and performances celebrating women, diversity, and new music.

Our exploration of music written by women for reed trio began in late 2016 when we were invited to perform at Festival Commixtus in the south of France the following year.  Music by female composers was the primary theme for this event in 2017.  Though we  had played quite a bit of reed trio repertoire, the only women whose work we knew about for this medium were Claude Arrieu and Jenni Brandon.  (Kristin and I had already performed Brandon’s Sequoia Trio at the same festival back in 2014.  It’s a terrific piece, but we wanted to find other trios rather than repeat the same repertoire at the same festival.)

We had no idea what was in store as we began looking for reed trios specifically written by women.  When any search is narrowed by such parameters as gender, race, preference, ethnicity, etc., one never knows what riches lie ahead.  We quickly found more music than we initially knew what to do with.  The only solution was to get the scores and parts and read through all of them.  Much to our delight, we came up with more than enough high quality music for multiple programs.  The challenge at that point was creating a program of contrasting styles and representing as many different nationalities as possible.

Our final program for the concerts we played in Vilhonneur, Angouleme, and Charente during Festival Commixtus included Trio en Ut by Claude Arrieu (1903-1990), Trio Classique by Fernande Breilh-Decruck (1896-1954), Three Observations for Three Woodwinds by Mabel Daniels (1878-1971), Suite en Trio by Claude Arrieu, Five Old Dances by Erzsébet Szonyi (b. 1924), Divertimento by Mary Chandler (1911-1996), and Nik-NAK by Alyssa Morris (b. 1984), which was commissioned by ROCO.  We remain grateful to the members of Reed Amis—Marilyn Cole, oboe, Angela Shankar, clarinet, and Melissa Kritzer, bassoon—for transcribing the original manuscripts of trios of Fernande Decruck’s trios into performable scores, and for sharing the music with us prior to its publication.  I highly recommend their commercially available recording of all six of Decruck’s reed trios.  We wound up loving the program we played in France and wanting to share the music with as many people as possible, so the conference in Boston seemed like a perfect opportunity.

The title of the trio by Alyssa Morris, Nik-NAK, was initially inspired by taking the first letters of each of our first names (NAK) and from that came not only the title of the trio, but also the inspiration to expand the instrumentation to include various nik-naks throughout the piece.  The first movement, Wood, calls for wood block with rubber mallet.  The second movement, Glass, includes water bottles tuned to various pitches played by all three performers at various times.  The final movement, Metal, requires wood block with foot pedal, triangle with beater, and brush stick on a music stand.  We played only the first movement on our concerts in France in September 2017 and premiered the entire work in October 2017 at Midtown Arts and Theater Center in Houston, Texas.  We have enjoyed performing this trio many times since the premiere, including on a concert at the Crypt Sessions in New York  and for a feature on Sirius XM, recorded live in New York.  (See my blog post entitled “ROCO in New York”.)  You can hear our world premiere performance in the “Listening Room” at www.roco.org.

Nik-NAK was one of the featured works at our performance in Boston, along with the above mentioned trios by Mary Chandler and Mabel Daniels.  Alecia also talked about ROCO’s history and mission, and we were so proud to be there to represent our one-of-a-kind chamber orchestra.

It was both unusual and exciting to attend a conference like this without running into lots of people we knew and without seeing the names of people on programs that we had at least heard about before.  So we grasped the opportunity to meet new people and learn more about the composers whose works were being performed.  We heard some intriguing new pieces, and got some new ideas about composers we are interested in for future commissions.

The weather was beautiful and the temperature a welcome respite from the heat of central Texas, so we spent as much time outdoors as our schedules would permit.  We enjoyed outdoor lunches at a wonderful Japanese fusion restaurant near our hotel, went to the Aquarium, browsed through an outdoor market (where we found these wonderful travel journals:  www.tributeproducts.com), took a land and water tour all over Boston, enjoyed some chocolate at L. A. Burdick, and attended a Sunday evening service at Trinity Church where we heard some wonderful music—a great choir and a fantastic organist.  It was yet another wonderful and varied trip with great friends!

“Traveling—it leaves you speechless, then turns you into a storyteller.” 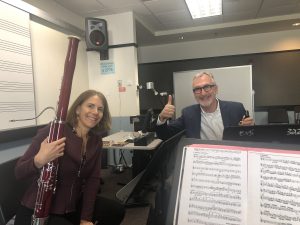 During rehearsal at Berklee College of Music 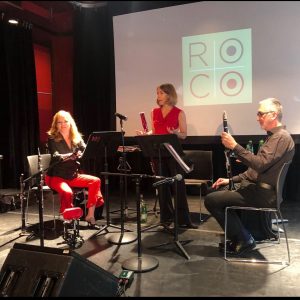 Kristin introduces our performance in Boston 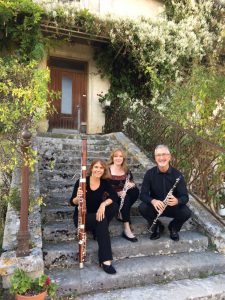